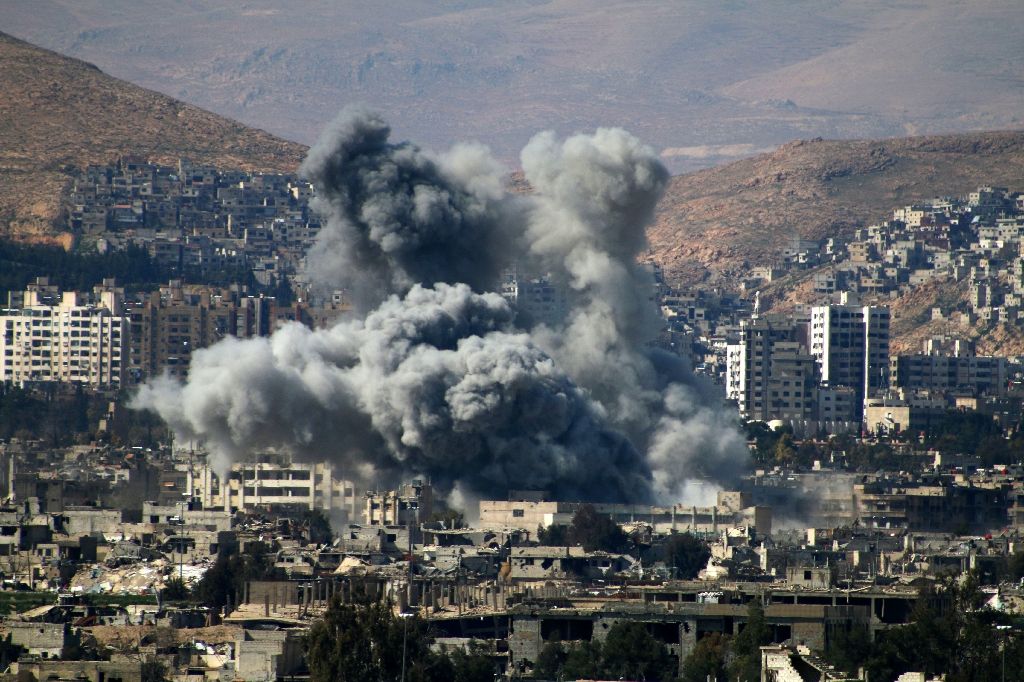 Damascus (AFP) - Twin bombs targeting Shiite pilgrims killed 59 people in Damascus on Saturday, most of them Iraqis, a monitoring group said of one of the bloodiest attacks in the Syrian capital.

There have been periodic bombings in Damascus, but the stronghold of the regime of President Bashar al-Assad has been largely spared the destruction faced by other major cities in six years of civil war.

A roadside bomb detonated as a bus passed by and a suicide bomber blew himself up in the Bab al-Saghir area, which houses several Shiite mausoleums that draw pilgrims from around the world, the Syrian Observatory for Human Rights said.

"There are also dozens of people wounded, some of them in a serious condition," he told AFP. Syrian state television said 40 people were killed and 120 wounded after "terrorists detonated two bombs".

It broadcast footage of several white buses with their windows shattered, some charred and peppered with shrapnel. Shoes, glasses and wheelchairs lay scattered on ground covered in blood.

Syrian Interior Minister Mohammad Shaar said the attack targeted "pilgrims of various Arab nationalities". "The sole aim was to kill," he said. The Iraqi foreign ministry said around 40 of its nationals were among the dead and 120 among the wounded.

A witness told AFP that the second bomb exploded as passers-by gathered at the scene of the first attack, and state television said a booby-trapped motorcycle was defused nearby. There was no immediate claim of responsibility.

Shiite shrines are a frequent target of attack for Sunni extremists of Al-Qaeda and the Islamic State group (IS), not only in Syria but also in neighbouring Iraq.

The foreign ministry in Damascus condemned "the cowardly terrorist attack which comes in response to victories of the Syrian Arab Army" against jihadists.

The Sayyida Zeinab mausoleum to the south of Damascus, Syria's most visited Shiite pilgrimage site, has been hit by several deadly bombings during the war.

Twin suicide bombings in the high-security Kafr Sousa district of the capital in January killed 10 people, eight of them soldiers. That attack was claimed by former Al-Qaeda affiliate Fateh al-Sham Front, which said that it had targeted Russian military advisers working with the Syrian army.

It was widely seen as an attempt to disrupt UN-brokered peace talks that took place the following month and which to Fateh al-Sham's anger were supported by its former Islamist rebel ally Ahrar al-Sham.

UN envoy Staffan de Mistura has called a new round of talks for March 23.

Fateh al-Sham has been repeatedly bombed in its northwestern stronghold this year, not only by the Syrian army and its Russian ally but also by a US-led coalition battling IS in both Syria and Iraq.

The rift over the UN-brokered talks between the rebels and the government has also seen deadly clashes between jihadists and their former Islamist rebel allies.

The two groups had together seized virtually all of the northwestern province of Idlib but are now vying for territorial control.

The bombings could provide the impetus for increased Iraqi strikes against IS in Syria, which Baghdad has already carried out near the border.

Iraqi forces launched an operation to retake Mosul -- the last IS-held city in Iraq -- in October. They recaptured its eastern side and now have their sights set on its more densely populated west.

Iraqi paramilitary forces said Saturday they had discovered a mass grave at Badush prison near Mosul containing the remains of hundreds of people executed by IS.

The jihadists reportedly killed up to 600 people after seizing Badush in 2014.

In northern Syria, Raqa, the de facto IS capital, is under threat from advancing Turkish-backed Syrian rebels, a US-backed alliance of Kurdish and Arab forces as well as Syrian government troops supported by Russia.

Three hundred families of foreign IS fighters have fled the city in 24 hours on boats across the Euphrates River to the south, the Observatory said Saturday.

Assad said in an interview broadcast Saturday that recapturing Raqa was a "priority" for his forces. While bomb attacks are rare in Damascus, the capital has been the target of shelling by rebels who hold areas on the outskirts.

The deadliest bombing around Damascus targeted the Sayyida Zeinab shrine in February 2016, costing 134 lives, in an attack claimed by IS.