90,000 Christians Killed in 2016, 1 Every 6 Minutes: Study BY SAMUEL SMITH , CP REPORTER, Dec 30, 2016 | 6:18 PM
Christians continue to be the most persecuted believers in the world with over 90,000 followers of Christ being killed in the last year, according to prominent Italian sociologist and author Massimo Introvigne. 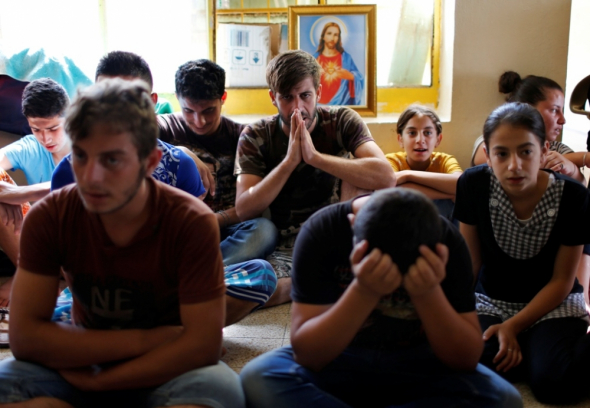 (Photo: Reuters/Ahmed Jadallah)Displaced Iraqi Christians who fled from Islamic State militants in Mosul, pray at a school acting as a refugee camp in Erbil, Iraq, September 6, 2014.

In an interview with Vatican Radio, Introvigne, the founder of the independent Center for Studies on New Religions based in Turin, Italy, cited statistics compiled by the Center for Study of Global Christianity at Gordon-Conwell Theological Seminary for a annual report that is expected to be released next month.

Introvigne said that there are between 500 to 600 Christians throughout the world that can't profess their faith in Christ freely without fear of persecution.

Meanwhile, over 90,000 Christians have been killed in the past year, which equates to one death every 6 minutes on average, Introvigne added.

The total number of Christians killed in 2016 has actually decreased from last year's findings of about 105,000, Introvigne relayed, adding that 70 percent of the Christians killed this year were slain in tribal conflicts in Africa. The other 30 percent was killed in terror attacks, government persecution and attacks on Christian villages across the globe.

The 61-year-old explained that Christians killed in the tribal conflicts were included in the study's total because many cannot, in good conscience, take up arms.

Although Introvigne believes that Christians are the most persecuted religious group in the world, he admitted that the center's 90,000 estimate is a bit more liberal than other organizations' statistics on Christian martyrs. 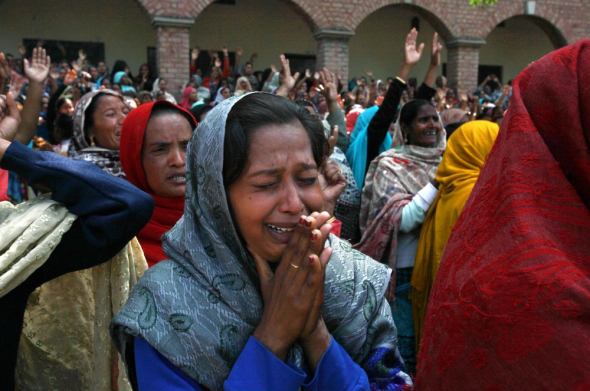 (Photo: Reuters/Mohsin Raza)Women from the Christian community mourn for their relatives, who were killed by a suicide attack on a church, during their funeral in Lahore, March 17, 2015. Suicide bombings outside two churches in Lahore killed 14 people and wounded nearly 80 others during services on Sunday in attacks claimed by a faction of the Pakistani Taliban.

Open Doors USA, which releases an annual report on persecuted Christians across the globe and provides a detailed global ranking of worst countries to live as a Christian, estimates that only 7,000 Christians were killed for their faith this year, according to Open Doors Director of Communications Emily Fuentes.

"However, this is an extremely conservative estimate, as we only track those we have confirmed details about name, location, etc," she told The Christian Post in an email on Friday. "There are likely many more."

"Over the past several years, we have seen a rise in violence in many African countries. However, our findings note that most violence against Christians worldwide is due to Islamic extremism," she added. "In African nations, we see large numbers of Christians killed by groups like Boko Haram or al-Shabab, but tribal antagonism also plays a large role in persecution of Christians."

The findings from the 2016 World Watch List indicated that Christians were persecuted like never before, as the organization tallied over 3,000 more Christians killed for faith-related reasons than its 2015 report.

"Death rate is just one factor of persecution," Fuentes asserted. "Many Christians have been displaced, attacked, abused or face hardship in their everyday lives because of their faith."

Despite the unprecedented numbers, the international human rights watchdog Release International stated in a report released Thursday that it expects Christian persecution to continue increasing in 2017.

"Sadly, this trend has been continuing upward for the past several years, so it is likely going to continue rising, especially with the spread of ISIS and other extremist groups throughout Africa, Central Asia, the Middle East and Southeast Asia," she explained.